Pensacola Driving Under the Influence of Alcohol or Drugs Lawyer, Chris L. Rabby

Pensacola DUI Attorney
An arrest for a charge of Driving Under the Influence (DUI) (known in other states as Drunk Driving, Driving While Intoxicated or Driving While Impaired) can have a significant impact on your life, liberty, and driving ability. Representation by an experienced trial attorney such as Pensacola DUI attorney Chris Rabby can be crucial in defending your case.

The “Legal Limit” in Florida

The legal limit in Florida is 0.08. That means that a driver with a breath or blood alcohol level of 0.08 or higher is presumed by law to be under the influence of alcohol. However, a breath test result over the legal limit does not necessarily mean that the defendant cannot launch a successful defense against the charge of DUI. For example, the arresting officer may not have had sufficient reason to stop the vehicle, probable cause to arrest the driver, the breath test machine may not have been working properly, or there may exist some other grounds to suppress the evidence. There  are many possible defenses that an experienced trial attorney will look for to weaken the State’s case.

Actual Physical Control
Did you know that driving is not a legal requirement of a DUI and you could be arrested for DUI when you were not even driving?
A classic example of this situation is an intoxicated individual who is sitting in the driver’s seat of the vehicle with the key in the ignition, listening to the radio, waiting for a ride. Although it is most commonly known as driving under the influence, Florida law actually also penalizes one who is in “actual physical control” of a motor vehicle while under the influence of alcohol or controlled substances.

Driver’s License Suspension
One of the most onerous consequences of a DUI arrest is the suspension of your driving privilege. Your driver’s license will be automatically suspended by the DHSMV (Department of Highway Safety and Motor Vehicles) unless you request a formal review hearing within ten days.
First offenders may waive this hearing and be allowed a business license.
At the formal review hearing, you will have the opportunity to examine the evidence against you, present defense witnesses, and make arguments as to why the Department should invalidate any suspension of your license.
An attorney experienced in DHSMV Formal Review Hearings can fight for you to keep your license by subpoenaing witnesses on your behalf and arguing applicable statutes and case law.

Florida Driving Under the Influence of Alcohol or Drugs Penalties

DUI Penalties and Punishments Under Florida Law vary, depending on alcohol level, prior offenses, accidents and injuries.
DUI convictions require that the court impose a DUI conviction, also known as an adjudication of guilt.
Required Penalties:
They mandate that a person be placed on probation, which may not be suspended.
A person must complete an approved DUI school.
50 hours of community service work (first offender), although some of these hours can usually be “bought out” at a rate of $10.00 per hour.
A Drug and Alcohol Evaluation and treatment as deemed necessary by the counselor.
Attendance of Drunk Driver Impact Panel(s), also known as DDIP.
Driver License suspensions, and sometimes car ignition interlock devices which require the driver to provide an alcohol-free breath sample.
The car must be impounded.
The person must abstain from the use of drugs and alcohol and are required to test for their usage.

First Offense:
A first Offense DUI conviction mandates 50 hours of community service work.
The courts typically allow some of these hours to be “bought out” at a rate of $10.00 per hour.

A first DUI conviction requires a total period of probation and incarceration which may not exceed one year.
(The maximum jail time varies based on alcohol level, prior offenses, accidents and injuries)
If no jail time is required by law, the court will typically imposed 12 months of probation and allow for early termination of the DUI probation after 6 months if all special terms and conditions are met. Florida Statute 316.193(5)(6).

Jail time for a first DUI conviction can not exceed 6 months unless the breath or blood alcohol concentration was 0.15 or higher in which case the court can impose imprisonment of up to nine months.

Immobilization or Impoundment of the person’s vehicle is required for a first DUI conviction under Florida law for a period of 10 days, which is not allowed as the same time as any incarceration.  There are exceptions to impoundment for work or family issues.

If the second conviction is within 5 years of a prior conviction a mandatory imprisonment of at least 10 days.

Immobilization or Impoundment of the vehicle is required for a second DUI conviction within five years under Florida law for 30 days which must not occur concurrently with incarceration. It is 10 days impoundment if the second DUI occurred outside of five (5) years.

Third DUI Conviction:
Fine:     More than 10 years from second: Not less than $2,000, or more than $5,000.
With BAL of .15 or higher or minor in the vehicle: Not less than $4,000.
Jail:      If third conviction within 10 years, mandatory imprisonment of at least 30 days. At least 48 hours of confinement must be consecutive.
If third conviction more than 10 years, imprisonment for not more than 12 months.
A minimum sentence of 30 days if convicted within 10 years of a first offense
Impound:    Vehicle impoundment for 90 days if convicted within 10 years of a first offense
Driver License revocation:     Within 10 Years of the second conviction: minimum 10 years revocation.
May be eligible for a hardship reinstatement after two years.

DUI Manslaughter Conviction:
Second Degree Felony (not more than $10,000 fine and/or 15 years imprisonment).
License revocation: Mandatory permanent revocation. If no prior DUI related convictions, may be eligible for hardship reinstatement after 5 years.

As you can see, Florida has some of the toughest DUI penalties in the country. Sometimes the only solution is to take the case to trial and try to beat the evidence against you. There are many defenses and arguments that can be made to create reasonable doubt and Chris Rabby has the knowledge and experience to fight a DUI charge in the Pensacola area properly. My practice is heavily focused on DUI defense and I am constantly keeping up to date with the latest cases and case law and attending numerous seminars to stay updated on the latest DUI defenses.

Advice:  The facts of a case are sometimes well established by the time you hire a lawyer.
So in advance, plan to limit alcohol consumption or have a designated driver.
Do not give them a reason to pull you over.
Drive safely,
Make sure the vehicle is in proper working order (lights),
Obey the traffic rules (use your turn signals),
Do not use a cell phone while driving,
Do not drive naked, or be engaged in activities that create bad driving patterns,
Be especially aware at night.
If you are facing a DUI in the Pensacola area please contact me directly so that I may answer any questions you have and provide you with a free case defense evaluation.

Contact Christopher L. Rabby, P.A. at our Pensacola, Florida law firm to speak with us today.
Your freedom is your priority — and ours. 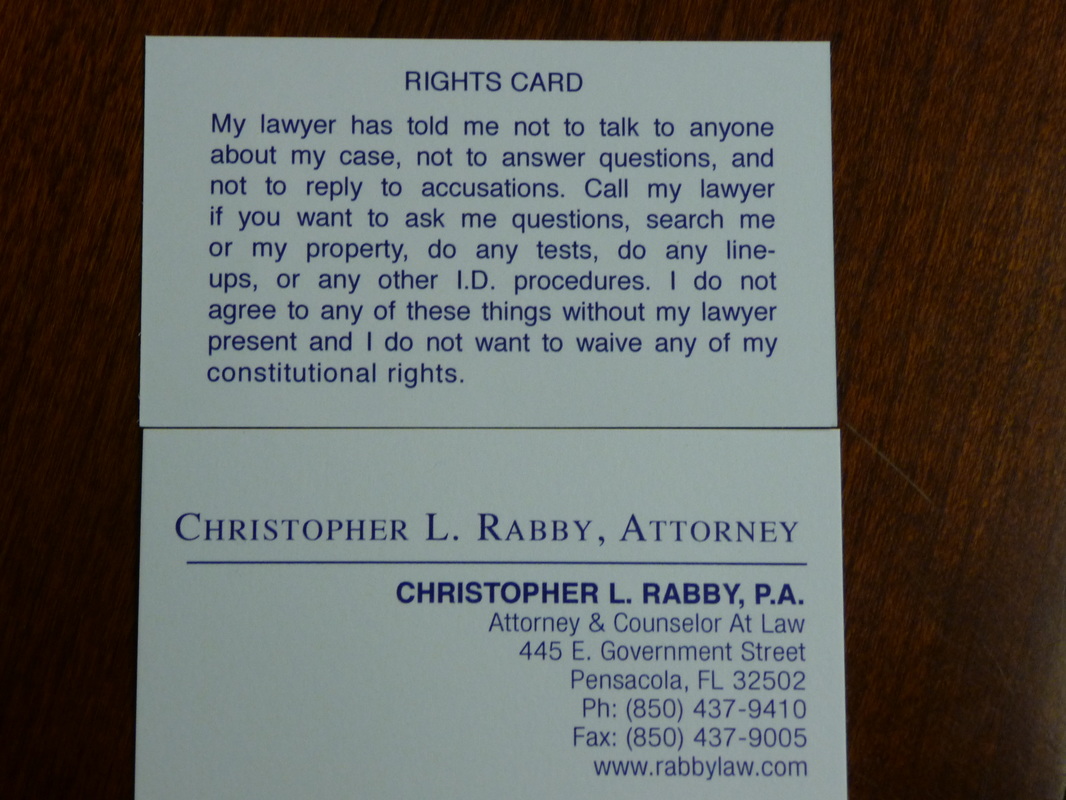