On “Scenic Highway” (Florida Highway 90) are areas know as “The Bluff’s and “The Chimney.” They are parks which overlook Pensacola Bay. While beautiful and historic, some use the area for illegal activities and many undercover officers frequent the area.

Bay Bluffs Park is a public park and nature preserve located along Scenic Highway, overlooking Pensacola Bay. The has two entrances, with covered pavilions and public parking, and provide access to about 800 feet of boardwalks and nature trails that descend the bluffs to the CSX Railroad and Escambia Bay beachfront.

The Chimney is a “mini” park, functioning as a roadside rest area. It has parking spaces and brick walkways. It is located on a portion of Highway 90 that is Scenic Highway in Pensacola, Florida. The remaining Chimney structure is from the historic Hyer-Knowles Planing Mill.  The chimney mill was built in the 1850’s and was part of the steam power plant for the “Hyer-Knowles Planing Mill” which was in operation by 1857.  The original bricks for the chimney were hand made by slaves in one the nearby brick factories on Escambia Bay.  In March 1862, General Braxton Bragg was evacuating the Confederate forces holding Pensacola when he was ordered to destroy everything that could be of use to the advancing Union forces, including the mill.   The brick chimney is the only part that remains.   It is a historical reminder of the internal struggles of the United States during the Civil War. It is listed in the National Register of Historic Places of the National Park Services, U.S. Department of the Interior.   It is also a Florida Heritage Landmark. 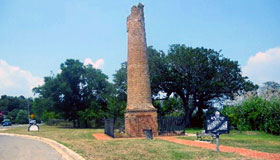 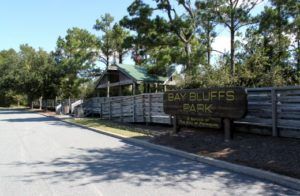